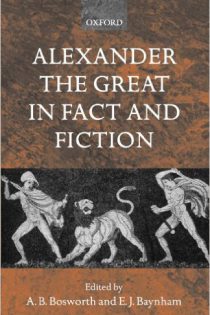 Alexander the Great in Fact and Fiction – A. B. Bosworth

By A. B. Bosworth (Author)
In History, ZZ Free

This book collects together ten contributions by leading scholars in the field of Alexander studies which represent the most advanced scholarship in this area. They span the gamut between historical reconstruction and historiographical research, and, viewed as a whole, represent a wide spectrum of methodology. This first English collection of essays on Alexander includes a comparison of the Spanish conquest of Mexico with the Macedonians in the east which examines the attitudes towards the subject peoples and the justification of conquest, an analysis of the attested conspiracies at the Macedonian and Persian courts, and studies of panhellenic ideology and the concept of kingship. There is a radical new interpretation of the hunting fresco from Tomb II at Vergina, and a new date for the pamphlet on Alexander's death which ends the Alexander Romance. Three chapters on historiography address the problem of interpreting Alexander's attested behavior, the indirect source tradition used by Polybius, and the resonances of contemporary politics in the extant histories.

Related Books to : Alexander the Great in Fact and Fiction – A. B. Bosworth