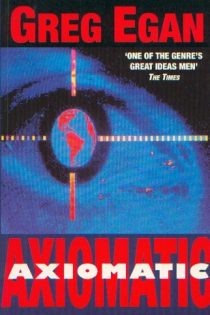 Axiomatic is a collection of Greg Egan's short stories that appeared in various science fiction magazines (mostly Interzone and Asimov's) between 1989 and 1992. Like most of Egan's work, the stories focus on science and ideas, sometimes at the expense of the writing. But although Egan may lack a certain stylistic flare, he more than makes up for it with his wonderful visions of the future. Some of the more interesting stories include "Into Darkness," the tale of a rescue worker whose territory is a runaway wormhole, and the title story "Axiomatic," which is about a man looking to find meaning in the senseless death of his wife.

(Note: this edition substitutes "The Vat" for "The Moat", which is in the print edition.)