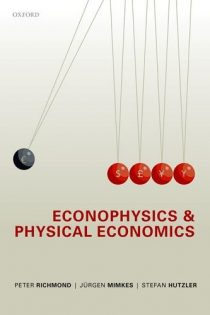 An understanding of the behaviour of financial assets and the evolution of economies has never been as important as today. …

An understanding of the behaviour of financial assets and the evolution of economies has never been as important as today. This book looks at these complex systems from the perspective of the physicist. So called 'econophysics' and its application to finance has made great strides in recent years. Less emphasis has been placed on the broader subject of macroeconomics and many economics students are still taught traditional neo-classical economics. The reader is given a general primer in statistical physics, probability theory, and use of correlation functions. Much of the mathematics that is developed is frequently no longer included in undergraduate physics courses. The statistical physics of Boltzmann and Gibbs is one of the oldest disciplines within physics and it can be argued that it was first applied to ensembles of molecules as opposed to being applied to social agents only by way of historical accident. The authors argue by analogy that the theory can be applied directly to economic systems comprising assemblies of interacting agents. The necessary tools and mathematics are developed in a clear and concise manner. The body of work, now termed econophysics, is then developed. The authors show where traditional methods break down and show how the probability distributions and correlation functions can be properly understood using high frequency data. Recent work by the physics community on risk and market crashes are discussed together with new work on betting markets as well as studies of speculative peaks that occur in housing markets. The second half of the book continues the empirical approach showing how by analogy with thermodynamics, a self-consistent attack can be made on macroeconomics. This leads naturally to economic production functions being equated to entropy functions - a new concept for economists. Issues relating to non-equilibrium naturally arise during the development and application of this approach to economics. These are discussed in the context of superstatistics and adiabatic processes. As a result it does seem ultimately possible to reconcile the approach with non-equilibrium systems, and the ideas are applied to study income and wealth distributions, which with their power law distribution functions have puzzled many researchers ever since Pareto discovered them over 100 years ago. This book takes a pedagogical approach to these topics and is aimed at final year undergraduate and beginning gradaute or post-graduate students in physics, economics, and business. However, the experienced researcher and quant should also find much of interest.

LEGAL NOTICE: The following PDFs files has been found on the Web. They are NOT HOSTED on our Servers. They are hosted on cucbyt.firebaseapp.com.
Contact their sites if you have any question about their content.