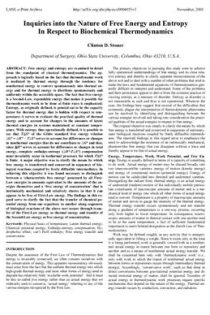 Inquiries into the Nature of Free Energy and Entropy. In Respect to Biochemical Thermodynamics

Scientific article / Entropy, 2000, Vol. 2, No. 3, pp. 106–141.Free energy and entropy are examined in detail from the standpoint of classical thermodynamics. The approach is logically based on the fact that thermodynamic work is mediated by thermal energy through the tendency for nonthermal energy to convert spontaneously into thermal energy and for thermal energy to distribute spontaneously and uniformly within the accessible space. The fact that free energy is a Second-Law, expendable energy that makes it possible for thermodynamic work to be done at finite rates is emphasized. Entropy, as originally defined, is pointed out to be the capacity factor for thermal energy that is hidden with respect to temperature; it serves to evaluate the practical quality of thermal energy and to account for changes in the amounts of latent thermal energies in systems maintained at constant temperature. With entropy thus operationally defined, it is possible to see that T∆S° of the Gibbs standard free energy relation ∆G° = ∆H° − T∆S° serves to account for differences or changes in nonthermal energies that do not contribute to ∆G° and that, since ∆H° serves to account for differences or changes in total energy, complete enthalpy-entropy (∆H° – T∆S°) compensation must invariably occur in isothermal processes for which T∆S° is finite. A major objective was to clarify the means by which free energy is transferred and conserved in sequences of biological reactions coupled by freely diffusible intermediates. In achieving this objective it was found necessary to distinguish between a 'characteristic free energy' possessed by all First-Law energies in amounts equivalent to the amounts of the energies themselves and a 'ree energy of concentration' that is intrinsically mechanical and relatively elusive in that it can appear to be free of First-Law energy. The findings in this regard serve to clarify the fact that the transfer of chemical potential energy from one repository to another along sequences of biological reactions of the above sort occurs through transfer of the First-Law energy as thermal energy and transfer of the Second-Law energy as free energy of concentration.

Related Books to : Inquiries into the Nature of Free Energy and Entropy. In Respect to Biochemical Thermodynamics