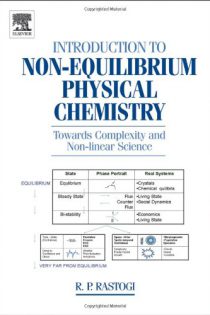 The book presents a critical and comprehensive account of Non-equilibrium Physical Chemistry from theoretical and experimental angle. It covers a …

The book presents a critical and comprehensive account of Non-equilibrium Physical Chemistry from theoretical and experimental angle. It covers a wide spectrum of non-equilibrium phenomena from steady state close to equilibrium to non-linear region involving transition to bistability, temporal oscillations, spatio-temporal oscillations and finally to far from equilibrium phenomena such as complex pattern formation, dynamic instability at interfaces, Chaos and complex growth phenomena (fractals) in Physico-chemical systems.Part I of the book deals with theory and experimental studies concerning transport phenomena in membranes (Thermo-osmosis,Electroosmotic ) and in continuous systems (Thermal diffusion,Soret effect) close to equilibrium Experimental tests provide insight into the domain of validity of Non-equilibrium Thermodynamics ,which is the major theoretical tool for this region. Later developments in Extended Irreversible Thermodynamics and Non-equilibrium Molecular dynamics have been discussed in the Appendix.Part II deals with non-linear steady states and bifurcation to multistability, temporal and spatio- temporal oscillations (Chemical waves). Similarly Part II deals with more complex phenomena such as Chaos and fractal growth occurring in very far from equilibrium region. Newer mathematical techniques for investigating such phenomena along with available experimental studies.Part IV deals with analogous non-equilibrium phenomena occurring in the real systems (Socio-political, Finance and Living systems etc.) for which physico-chemical systems discussed in earlier chapters provide a useful model for development of theories based on non-linearscience and science of complexity.Key Features:- The book provides a critical account of theoretical studies on non-equilibrium phenomenon from region close to equilibrium to far equilibrium.- Experimental studies have been reported which provide test of the theories and their limitations.- Impacts of the concepts developed in non-equilibrium Physical Chemistry in sociology, economics and other social science and living systems has been discussed.

LEGAL NOTICE: The following PDFs files has been found on the Web. They are NOT HOSTED on our Servers. They are hosted on www.cmp.caltech.edu.
Contact their sites if you have any question about their content.

is not intended to be an exhaustive introduction to thermodynamics, and the ... of this book is concerned with understanding the properties of physical systems ... We will discuss the issues of equilibrium versus nonequilibrium in the context of ... systems, from physics to chemistry, have much in common, and this gives a...
http://www.cmp.caltech.edu/~mcc/BNU/Notes1_2.pdf