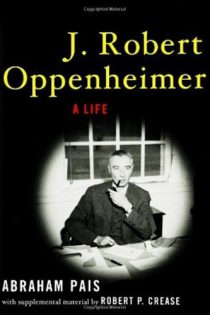 The late Abraham Pais wrote the definitive biography of Albert Einstein, "Subtle is the Lord" which won an American Book …

The late Abraham Pais wrote the definitive biography of Albert Einstein, "Subtle is the Lord" which won an American Book Award. As a distinguished physicist and Einstein's colleague, Pais combined a sophisticated understanding of physics with first-hand knowledge of this notoriously private individual, offering rare insights into both. It is his unique double perspective that makes his work so valuable. Now, in Shatterer of Worlds, Abraham Pais offers an illuminating portrait of another eminent colleague, J. Robert Oppenheimer, one of the most charismatic and enigmatic figures of modern physics. Pais introduces us to a precocious youth who sped through Harvard in three years, made signal contributions to quantum mechanics while in his twenties, and was instrumental in the growth of American physics in the decade before the Second World War, almost single-handedly putting American physics on the map. Pais paints a revealing portrait of Oppenheimer's life in Los Alamos, where in twenty remarkable, feverish months, under his inspired leadership, the first atomic bomb was designed and built, a success that made Oppenheimer America's most famous scientist. Pais, who was his next-door neighbor for many years, describes Oppenheimer's long tenure as Director of the Institute of Advanced Study at Princeton, but also shows how Oppenheimer's intensity and arrogance won him powerful enemies, who would ultimately make him one of the principal victims of the Red Scare of the 1950s. Told with compassion and deep insight, Shatterer of Worlds is the most comprehensive biography of the great physicist available. It is Abraham Pais's final work, completed after his death by Robert P. Crease, an acclaimed historian of science in his own right.