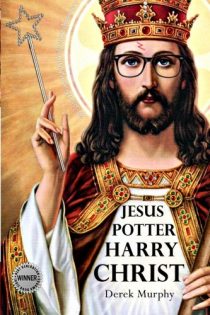 Jesus Potter Harry Christ uses the similarities between Jesus and Harry to re-open the debate over the historical Jesus, arguing …

Jesus Potter Harry Christ uses the similarities between Jesus and Harry to re-open the debate over the historical Jesus, arguing that both Harry and Jesus are spiritual metaphors told in the literary form of historical fiction. With hundreds of footnotes and references from both ancient mythology and modern culture, Jesus Potter Harry Christ is a fresh and arresting account of Christian history that is not predicated on the flesh and bones of a historical founder. "For those whose minds can ask questions freely without the enforcement of dogma, Derek Murphy raises a genuine argument which Christian apologists have no answers to besides merely repeating their dogmatic convictions in the hope that re-asserting the dogma will confirm it as truth." --John Thomas Didymus - Goddiscussion.com "Whether or not one agrees with Murphy's ultimate position, and whether or not one agrees with his arguments that Jesus was entirely (rather than mostly) mythic, Jesus Potter Harry Christ is well worth wading through, and wade through it one must, simply because of the sheer mass and volume of evidence the author provides. Make this a book whose pages you dog-ear for further reference and second readings." --Tim Callahan, Skeptic magazine's religion editor and author of the books "Bible Prophecy" and "The Secret Origins of the Bible" "Murphy sifts through various mystery religions and myths of a dying and resurrecting god, and their possible influence upon the Gospel story. For once, it's done tastefully and without sensationalism. Maybe you've read works by Freke, Doherty, and Harpur. While I don't want to take anything away from those researchers--their books are interesting in their own right--I found Murphy's tempered treatment much more to my taste. Without trying to foist a Gnostic version of Christianity on me, and without succumbing to overzealous scholarship, Murphy gently yet forcefully introduces the strong similarities between Christianity and other first-century religious philosophies and mystery cults, concluding in the strong likelihood that Jesus was a mythical savior." --Lee Harmon, author of "Revelation: The Way it Happened" "In the newly-released (and blasphemously-titled) Jesus Potter Harry Christ, Derek Murphy makes the case that J. K. Rowling -- the author of the Harry Potter series -- achieved her success by tapping into some of the deepest and most ancient longings of the human heart. These same longings, Murphy argues, compelled first-century pagans to construct what he calls "the Jesus myth." Murphy points to similarities between the Gospel accounts of Jesus' virgin birth, His passion and His return from the grave with the myths of pagan idols like Isis, Sarapis, Horus and Apollo, Murphy hopes to convince his readers that Jesus -- just like the gods of mythology -- is fiction. In fact, he believes that Jesus is just an amalgam of history's best myths." --Chuck Colson, Christian leader, cultural commentator, and former Special Counsel for President Richard Nixon

LEGAL NOTICE: The following PDFs files has been found on the Web. They are NOT HOSTED on our Servers. They are hosted on skemman.is, www.library.ucdavis.edu.
Contact their sites if you have any question about their content.

The Good, the Bad and the Magic - Skemman