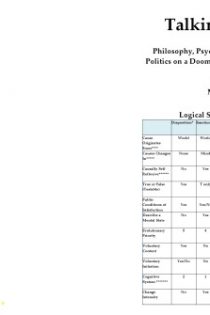 By Michael Starks (Author)
In Psychology

This collection of articles and reviews are about human behavior (as are all articles by anyone about anything), and so …

This collection of articles and reviews are about human behavior (as are all articles by anyone about anything), and so about the limitations of having a recent monkey ancestry (8 million years or much less depending on viewpoint) and manifest words and deeds within the framework of our innate psychology as presented in the table of intentionality. As famous evolutionist Richard Leakey says, it is critical to keep in mind not that we evolved from apes, but that in every important way, we are apes. If everyone was given a real understanding of this (i.e., of human ecology and psychology to actually give them some control over themselves), maybe civilization would have a chance. As things are however the leaders of society have no more grasp of things than their constituents and so collapse into anarchy and dictatorship appears inevitable.
Since philosophy proper is essentially the same as the descriptive psychology of higher order thought (behavior), and philosophical problems are the result of our innate psychology, or as Wittgenstein put it, due to the lack of perspicuity of language, they run throughout human discourse and behavior, so there is endless need for philosophical analysis, not only in the ‘human sciences’ of philosophy, sociology, anthropology, political science, psychology, history, literature, religion, etc., but in the ‘hard sciences’ of physics, mathematics, and biology. It is universal to mix the language game questions with the real scientific ones as to what the empirical facts are. Scientism is ever present and the master has laid it before us long ago, i.e., Wittgenstein (hereafter W) beginning with the Blue and Brown Books in the early 1930’s.

Although I separate the book into sections on philosophy and psychology, religion, biology, the ‘hard sciences’ and politics/sociology/economics, all the articles, like all behavior, are intimately connected if one knows how to look at them. As I note, The Phenomenological Illusion (oblivion to our automated System 1) is universal and extends not merely throughout philosophy but throughout life. I am sure that Chomsky, Obama, Zuckerberg and the Pope would be incredulous if told that they suffer from the same problems as Hegel, Husserl and Heidegger, or that that they differ only in degree from drug and sex addicts in being motivated by stimulation of their frontal cortices by the delivery of dopamine (and over 100 other chemicals) via the ventral tegmentum and the nucleus accumbens, but it’s clearly true. While the phenomenologists only wasted a lot of people’s time, they are wasting the earth and their descendant’s future.

I hope that these essays will help to separate the philosophical issues of language use from the scientific factual issues, and in some small way hinder the collapse of civilization, or at least make it clear why it is doomed