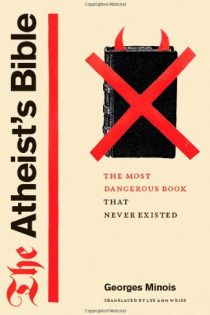 The Atheist’s Bible: The Most Dangerous Book That Never Existed – Georges Minois

By Georges Minois (Author)
In History

Like a lot of good stories, this one begins with a rumor: in 1239, Pope Gregory IX accused Frederick II, …

Like a lot of good stories, this one begins with a rumor: in 1239, Pope Gregory IX accused Frederick II, the Holy Roman Emperor, of heresy. Without disclosing evidence of any kind, Gregory announced that Frederick had written a supremely blasphemous book—De tribus impostoribus, or the Treatise of the Three Impostors—in which Frederick denounced Moses, Jesus, and Muhammad as impostors. Of course, Frederick denied the charge, and over the following centuries the story played out across Europe, with libertines, freethinkers, and other “strong minds” seeking a copy of the scandalous text. The fascination persisted until finally, in the eighteenth century, someone brought the purported work into actual existence—in not one but two versions, Latin and French. Although historians have debated the origins and influences of this nonexistent book, there has not been a comprehensive biography of the Treatise of the Three Impostors. In The Atheist’s Bible, the eminent historian Georges Minois tracks the course of the book from its origins in 1239 to its most salient episodes in the seventeenth and eighteenth centuries, introducing readers to the colorful individuals obsessed with possessing the legendary work—and the equally obsessive passion of those who wanted to punish people who sought it. Minois’s compelling account sheds much-needed light on the power of atheism, the threat of blasphemy, and the persistence of free thought during a time when the outspoken risked being burned at the stake.

Related Books to : The Atheist’s Bible: The Most Dangerous Book That Never Existed – Georges Minois

LEGAL NOTICE: The following PDFs files has been found on the Web. They are NOT HOSTED on our Servers. They are hosted on h-france.net, raac.iupui.edu.
Contact their sites if you have any question about their content.