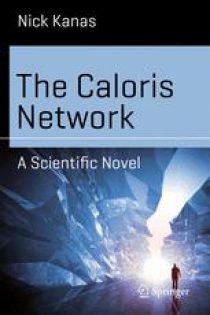 The Caloris Network: A Scientific Novel

The year is 2130. The first-ever expedition is sent to Mercury to search for the cause of an unknown source …

The year is 2130. The first-ever expedition is sent to Mercury to search for the cause of an unknown source of electromagnetic radiation that can destroy space ships passing by the planet. Thought to be inhospitable and lifeless, the surface of Mercury provides startling surprises for the crew that endanger their lives and challenge their established notions of what it means to be a sentient being. And some of the crew members have their own separate agendas …The scientific appendix at the end of the book introduces readers to the wondrous world of Mercury and how it has been portrayed in literary fiction up to the present time. The author then uses scientific literature to present a concept of life that is not based on carbon chemistry or the need for water. There is also a discussion of consciousness based on electromagnetic wave theory. References are provided for further reading.Nick Kanas is an Emeritus Professor of Psychiatry at the University of California, San Francisco, where he directed the group therapy training program. For over 20 years he conducted research on group therapy, and for nearly 20 years after that he was the Principal Investigator of NASA-funded research on astronauts and cosmonauts. He is the co-author of Space Psychology and Psychiatry, which won the 2004 International Academy of Astronautics Life Science Book Award, and the author of Humans in Space: The Psychological Hurdles, which won the 2016 International Academy of Astronautics Life Science Book Award.Dr. Kanas has presented talks on space psychology and on celestial mapping at several regional and Worldcon science fiction conventions. A Fellow of the Royal Astronomical Society (London), he has been an amateur astronomer for over 50 years and is an avid reader of science fiction. He is also the author of two non-fiction books (Star Maps: History, Artistry, and Cartography and Solar System Maps: From Antiquity to the Space Age) and two science fiction novels (The New Martians and The Protos Mandate), all published by Springer.

Related Books to : The Caloris Network: A Scientific Novel

LEGAL NOTICE: The following PDFs files has been found on the Web. They are NOT HOSTED on our Servers. They are hosted on www.internet-of-things-research.eu, repositorio.ufpe.br, www.noao.edu, www.edu.gov.mb.ca.
Contact their sites if you have any question about their content.

Internet of Things Connecting the Physical, Digital and Virtual

for research and innovation regarding the IoT, while exposing you to the challenges and ... advanced robotic capabilities, along with novel applications, and by extension, ... Clothing to track the amount of calories burned. • Clothing to track...
http://www.internet-of-things-research.eu/pdf/Digitising_the_Industry_IoT_IERC_2016_Cluster_eBook_978-87-93379-82-4_P_Web.pdf

NEXT - A DISSERTATION-NOVEL: the role of science fiction

Masters Dissertation explores the role of science fiction's mechanisms in Design ... scales representing calories, nutrients and toxins hopped from the bowl in his ... Network. Cool toys. In theory, they should be used to simulate and prototype...
https://repositorio.ufpe.br/bitstream/123456789/32980/1/DISSERTA%C3%87%C3%83O%20Jacques%20Waller%20Barcia%20Junior.pdf

The Caloris Basin. • Antipodal terrain. • Scarps ... The Caloris Antipode ... or slower? (For many years, scientists assumed Mercury was in synchronous rotation!)
https://www.noao.edu/staff/csalyk/AST101/presentations/Mercury.pdf

Decreased physical activity, coupled with an over-consumption of calories, ... for optimal growth and development (Canadian Fitness and Lifestyle Research.
https://www.edu.gov.mb.ca/k12/cur/physhlth/frame_found_gr12/rm/module_c_lesson_2.pdf