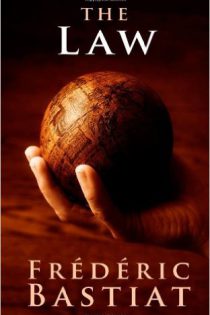 The Law by Frédéric Bastiat

How is it that the law enforcer itself does not have to keep the law? How is it that the law permits the state to lawfully engage in actions which, if undertaken by individuals, would land them in jail? These are among the most intriguing issues in political and economic philosophy. More specifically, the problem of law that itself violates law is an insurmountable conundrum of all statist philosophies. The problem has never been discussed so profoundly and passionately as in this essay by Frederic Bastiat from 1850. The essay might have been written today. It applies in ever way to our own time, which is precisely why so many people credit this one essay for showing them the light of liberty. Bastiat's essay here is timeless because applies whenever and wherever the state assumes unto itself different rules and different laws from that by which it expects other people to live. And so we have this legendary essay, written in a white heat against the leaders of 19th century France, the reading of which has shocked millions out of their toleration of despotism. This new edition from the Mises Institute revives a glorious translation that has been out of print for a hundred years, one that circulated in Britain in the generation that followed Bastiat's death. This newly available translation provides new insight into Bastiat's argument. It is a more sophisticated, more substantial, and more precise rendering than any in print. The question that Bastiat deals with: how to tell when a law is unjust or when the law maker has become a source of law breaking? When the law becomes a means of plunder it has lost its character of genuine law. "Basitats the Law". "Basitats the Law.pdf" Size: "554.51 KB"

Related Books to : The Law by Frédéric Bastiat

LEGAL NOTICE: The following PDFs files has been found on the Web. They are NOT HOSTED on our Servers. They are hosted on cdn.mises.org, files.libertyfund.org, www.wju.edu, cafehayek.com.
Contact their sites if you have any question about their content.

Anyone building a personal library of liberty must include in it a copy of Frédéric Bastiat's classic essay, “The Law.” First published in 1850 by the great French...
https://cdn.mises.org/thelaw.pdf

The Law, the State, and other political writings, 1843–1850 /. Frédéric Bastiat; Jacques de Guenin, general editor; translated from the French by Jane Willems...
http://files.libertyfund.org/files/2450/Bastiat_1573-02_LFeBk.pdf

underpins the economic writings of Claude Frédéric Bastiat (1801-1850), a French ... Law, Bastiat defined economics as “the science of determining whether the...
https://www.wju.edu/academics/iscm/pdf/StolyrovBastiat.pdf

The Law and Economics of FrÃ©dÃ©ric Bastiat - Cafe Hayek