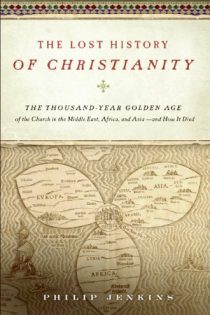 The Lost History of Christianity: The Thousand-Year Golden Age of the Church in the Middle East, Africa, and Asia–and How It Died

I read this good book, here in Brazil. This book is about the collapse of Christianity in Asia and North …

I read this good book, here in Brazil. This book is about the collapse of Christianity in Asia and North of Africa. This book is very easy to understand and concise. Its size is small and has less than 270 pages of text. I read all of it, in less than three days.nSome good things of this book:n1-It talks about a suject forgotten, even by the majority of the Christians.n2-This book remembers the genocides and massacres of defenseless Christians, mainly by Moslens, since the later foundation.n3-Shows how Islam became success in Asia, while Asiatic Christianism means failure.n4-Remembers the calamitous history of Nestorianism. Before Islam, Nestorianism was far bigger than Roman Catholic Church. Nestorian churches and monasteries spreaded by imense parts of Asia, the biggest continent of Earth. Today, Nestorianism is a small cult and its headquarter is in Chicago, United States. See the page 24 of this book.n5-This book remembers that not only Islam destroied Christianism in Asia. Some Chinese emperors did persecutions, against Nestorians and latter against Catholics.n6-On page 195, this book remembers that Middle Eastern Christian women were dressed in similar ways, as Islamic women then and today. This fact is very difficult to be written in any other book. nThe main failure of this book is the fact that it is very weak, about the foundation of Islam and early Islamic conquests.nThe second failure of this book is its weakness about the Roman Catholicism. I'll show some examples of the author's weakness about Roman Catholicism:n1-On page 3, we can read: "Christianity became predominantly European not because this continent had any obvious affinity for that faith, but by default:Europe was the continent where it was not destroyed."n2-Page 27, we can read: "European churches, especially the Roman Catholic Church, became the mainstream of belief by dint of being, so to speak, the last men standing."n3-Pages 244 and 245: "In 1900, the Orthodox represented 21 percent of the world's Christian population, while Catholics made up 48 percent.Over time, thought, Catholics benefited enormously from their presence in growing sections of the global South, while Orthodox missions enjoyed limited success, and Catholics were much likely than Orthodox to carry their faith with them to new parts of the world. Catholics, in other words, invested in emerging markets, while the Orthodox did not. After 1917, Orthodox believers suffered enormously under Communist persecution. When Eurpean birthrates declined steeply in the late twenieth century, this trend hit the Orthodox world very severely while affecting only that portion of Catholic Christianity that lived in Europe. Today, Catholics account for 52 percent of Christians, but the Orthodox just 11 percent." nAbout these thing writen in this book, about Roman Catholicism, I'll just copy some sentences writen by another reviewer of this same book:"If I had a question to ask the author I would challenge his acceptance of these Christianities as equivalent to those of the West. Is it possible that they died out because their theology and understanding of Christ's message was flawed? It is not for nothing that they were deemed heretical. Even an atheistic Darwinist might speculate that Catholicism has grown exponentially because it figured out the right way to do things."nYes, the Roman Catholicism was almost exterminated in Japan, during XVII century, but with far less percent of followers in the population than Jacobists or Nestorianists in Middle East, the Catholic Japaneses fought for their rights in Shimabara revolt, almost to the last man. Catholics in Spain fought against Islamics during more than 700 years, until their victory and survival of thier culture, language and religion. Asiatic and North African Christianism was defeated by a small group of Islamic armies in a few decades. In the other hand, Roman Catholics fought and won, not just some bands of Arabs, but from Islamic huge armies from three continents and this, since the first decades of VII century.nThere's no cross, without a sword. The Asiatic and North African Christianism didn't died because were good, but because they were bad. No Jacobist or Nestorianist patriarch ever thought, about fight against Islam, until it was decades or even centuries too late. They had thousands of churches and monasteries, many thousands of precious scrolls and thousands of scholars, but they hadn't the basic knowledge that Islamic rule means the end of their faiths. In fact they were against the despicable Bizanthine government, but never thought about having their own government and freedom. Nestorian patriarch Timothy was at the side of Islamic Califa, not in the side of Catholics or any other kind of Christians. They collaboreted with Islamics and were doomed to extinction some centuries later, while other Christians were enslaved and murdered by califa's amies. nYes, as another reviewer wrote:" if the Mongols had adopted Christianity instead of Islam, the world would be a different place". But even so, centuries before the Mongols, Asiatic Christianism was the looser's religion. In my opinion, the Mongols gave freedom of religion to the Asiatic Christians for decades. And they lost their real last chance for nothing. Then came the calamity, the 14th century, when Asiatic Christianism became the poweless and despicable thing that it is today. nIslam isn't good, but old Asiatic Christianism was even worse than Islam.nOf the five old Church's patriarch cities, four are now Islamic cities. Just Rome remains a Christian city, with a Pope. And this since 1453, when Constantinople, today called Istambul was conquested by the Turks.

Related Books to : The Lost History of Christianity: The Thousand-Year Golden Age of the Church in the Middle East, Africa, and Asia–and How It Died

LEGAL NOTICE: The following PDFs files has been found on the Web. They are NOT HOSTED on our Servers. They are hosted on www.laici.va.
Contact their sites if you have any question about their content.

Two thousand years of the Church's mission in Asia:

... Lost History of Christianity: the thousand-year golden age of the church in the. Middle East, Africa, and Asia – and how it died, HarperCollins e-books, New...
http://www.laici.va/content/dam/laici/documenti/aamm/proclaiming-jesus-christ-in-asia/conferences/two-thousand-years-church-mission.pdf