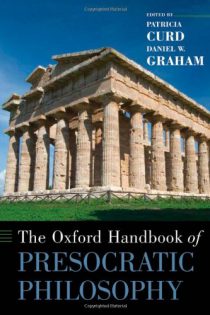 The Oxford Handbook of Presocratic Philosophy

In the sixth and fifth centuries B.C. a new kind of thinker appeared in Greek city-states, dedicated to finding the …

In the sixth and fifth centuries B.C. a new kind of thinker appeared in Greek city-states, dedicated to finding the origins of the world and everything in it, using observation and reason rather than tradition and myth. We call these thinkers Presocratic philosophers, and recognize them as the first philosophers of the Western tradition, as well as the originators of scientific thinking. New textual discoveries and new approaches make a reconsideration of the Presocratics at the beginning of the twenty-first century especially timely. This handbook brings together leading international scholars to study the diverse figures, movements, and approaches that constitute Presocratic philosophy. More than a survey of scholarship, this study presents new interpretations and evaluations of the Presocratics' accomplishments, from Thales to the sophists, from theology to science, and from pre-philosophical background to their influence on later thinkers. Many positions presented here challenge accepted wisdom and offer alternative accounts of Presocratic theories. This handbook includes chapters on the Milesians (Thales, Anaximander, Anaximenes), Xenophanes, Heraclitus, Parmenides, Anaxagoras, Empedocles, the Pythagoreans, the atomists, and the sophists. Special studies are devoted to the sources of Presocratic philosophy, oriental influences, Hippocratic medicine, cosmology, explanation, epistemology, theology, and the reception of Presocratic thought in Aristotle and other ancient authors.

Related Books to : The Oxford Handbook of Presocratic Philosophy