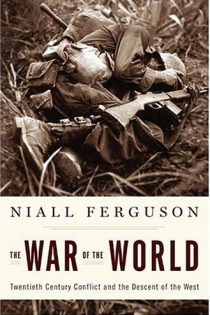 The War of the World: Twentieth-Century Conflict and the Descent of the West

The War of the World is a detailed historical examination of the many wars fought in the twentieth century. The …

The War of the World is a detailed historical examination of the many wars fought in the twentieth century. The focus, though, is on the historical backgrounds and atrocities committed in World War I and World War II. During this sanguinary century of Dantean horror over 10 million people were killed in World War I while World War II resulted in the death of at least 50 million individuals. Many of these deaths were among the civilian populations of Europe and Asia who died horrible deaths in such circles of hell as:n1. Nazi extermination and concentration camps where millions were murdered.n2. Soviet Gulag installations sent millions to their deaths. Stalinist terror tactics, famine, starvation, ethnic groups forced to emigrate, the Atomic Bomb in Hiroshima, Nagasaki, air war and terrorism all darkened the face of the sun. Dr. Ferguson provides ample and palpable evidence of the cruelty of humans murdering those who they perceived as their enemies.n3. A belief in "tooth and nail" social Darwinism prevailed in such lands as Nazi Germany which viewed Jews as non-human vermins ripe for removal from Nordic society. Eugenics and the death of mentally ill patients became the norm in totalitarian societies.n4. Ferguson notes that economic instability can lead to conflict among nations.n5. Ethnic conflicts in South Central and Eastern Europe precipitated the beginning of World War I and World War II.n6. Wars often begin in revolts by indigenous populations against dying empires. Racial prejudice is widespead throughout the world including democracies. n World War I saw the death of the Russian, Austria-Hungarian, German and Turkish empires. World War II saw the defeat of the Axis powers: Germany, Italy, Japan and their collaborators by the rising might of superpowers the United States and the Soviet Union. The Soviet Union and US became bitter foes during the cold war. Millions of victims have died in warfare since the end of World War II in 1945.n Ferguson covers the two world wars in great detail emphasizing the economy, political and military actions carried out by the major players in these wars: Great Britain, the USA, France, Germany, Japan and China. By emphasizing the economic factor and dispelling several myths about the course of the war Ferguson, a brilliant Scottish scholar in the field of history and economics, plows new and fertile historical turf.n Dr Niall Ferguson's book takes its title from H.G. Welles' 1899 "The War of the World" in which the novelist posits a time when Martians will invade the earth. Ferguson, though, shows how the horrors of the past century were not initiated by aliens from Mars but by human beings filled with hatred toward the "other". Racial and ethnic genocides (such as the Ottoman Turks launched against the Armenians; slaughters in Africa and in Europe) have too often led in massive murder of innocent human beings. n This 800 magnus opus is not pleasant reading. The book should be on the bookshelf of everyone who seeks an insight into the black heart of darkness which always threatens to efface the better angels of our nature from ascending into the light of life and liberty. Ferguson has written an outstanding book!

Related Books to : The War of the World: Twentieth-Century Conflict and the Descent of the West

LEGAL NOTICE: The following PDFs files has been found on the Web. They are NOT HOSTED on our Servers. They are hosted on users.clas.ufl.edu, www.canton.edu, www.sem.tsinghua.edu.cn, ssandhbooks.files.wordpress.com, www.newhartfordschools.org.
Contact their sites if you have any question about their content.

The Next War of the World , By: Ferguson, Niall - CLAS Users

2006年9月1日 - IN 1898, H. G. Wells wrote The War of the Worlds, a novel that imagined the destruction ... The twentieth century was the bloodiest era in history. World ... conflicts were only two of the more deadly ones in the last hundred years. ... Taiping Rebellion in the mid-nineteenth century; and some cases of Western.
http://users.clas.ufl.edu/zselden/Course%20Readings/Ferguson1.pdf

The War of the World: Twentieth-Century Conflict and the Descent of the West. New York: Penguin Press, 2006. Fitzpatrick, Sheila. The Russian Revolution.
https://www.canton.edu/media/curriculum/HIST102.pdf

Course Announcement: China and the World: A Historic

a course “China and the World: A Historic Perspective” at Tsinghua SEM from May ... War of the World: Twentieth-Century Conflict and the Descent of the West, a.
http://www.sem.tsinghua.edu.cn/semcms_com_www/upload/article/image/2016_2/5_15/eea9io89jgns.pdf

as 9/11, recent economic problems in Latin America, the second Gulf War and the enlargement of the. European ... A World History of the Twentieth Century Volume I: Western Dominance,. 1900–45 by ... been argued that the conflict of ideology is past and that ... beings was European or of European descent. A century later...
https://ssandhbooks.files.wordpress.com/2015/04/a-history-of-the-world1.pdf

AP European History • World War I • J.F. Walters & G.W. Whitton ... The War of the World: Twentieth-Century Conflict and the Descent of the West, Niall Ferguson...
https://www.newhartfordschools.org/site/handlers/filedownload.ashx?moduleinstanceid=4934&dataid=3482&FileName=5_B_World_War_I.pdf