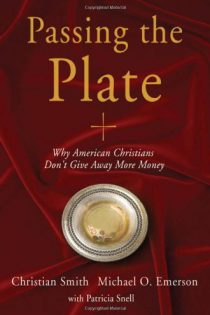 Passing the Plate: Why American Christians Don’t Give Away More Money

Passing the Plate shows that few American Christians donate generously to religious and charitable causes -- a parsimony that seriously undermines the work of churches and ministries. Far from the 10 percent of one's income that tithing requires, American Christians' financial giving typically amounts, by some measures, to less than one percent of annual earnings. And a startling one out of five self-identified Christians gives nothing at all. This eye-opening book explores the reasons behind such ungenerous giving, the potential world-changing benefits of greater financial giving, and what can be done to improve matters. If American Christians gave more generously, say the authors, any number of worthy projects -- from the prevention and treatment of HIV/AIDS to the promotion of inter-religious understanding to the upgrading of world missions -- could be funded at astounding levels. Analyzing a wide range of social surveys and government and denominational statistical datasets and drawing on in-depth interviews with Christian pastors and church members in seven different states, the book identifies a crucial set of factors that appear to depress religious financial support -- among them the powerful allure of a mass-consumerist culture and its impact on Americans' priorities, parishioners' suspicions of waste and abuse by nonprofit administrators, clergy's hesitations to boldly ask for money, and the lack of structure and routine in the way most American Christians give away money. In their conclusion, the authors suggest practical steps that clergy and lay leaders might take to counteract these tendencies and better educate their congregations about the transformative effects of generous giving. By illuminating the social and psychological forces that shape charitable giving, Passing the Plate is sure to spark a much-needed debate on a critical issue that is of much interest to church-goers, religious leaders, philanthropists, and social scientists.

Related Books to : Passing the Plate: Why American Christians Don’t Give Away More Money

LEGAL NOTICE: The following PDFs files has been found on the Web. They are NOT HOSTED on our Servers. They are hosted on mcgrath.nd.edu, generosityresearch.nd.edu, www.ecfa.org.
Contact their sites if you have any question about their content.

Charitable giving is institutionalized in many religions, such as the Christian tithe—that is, giving ten percent of one's income—and Islam's zakat, one of the faith's...
https://generosityresearch.nd.edu/assets/9286/religious_giving.pdf

Barna reports that 5 percent of all Americans and 12 percent of born-again Christians tithe (donate ten percent or more of their income). Over the years, little.
http://www.ecfa.org/Documents/News/20-Truths-About-Tithers-Executive-Summary-eBook-Report.pdf