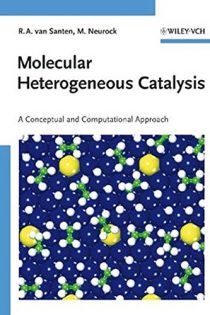 By Rutger A. van Santen (Author)
In Chemistry, Physical Chemistry

An integrated approach to the molecular theory of reaction mechanism in heterogeneous catalysis, largely based on the knowledge among the …

An integrated approach to the molecular theory of reaction mechanism in heterogeneous catalysis, largely based on the knowledge among the growing theoretical catalysis community over the past half century, and covering all major catalytic systems. The authors develop a general conceptual framework, including in-depth comparisons with enzyme catalysis, biomineralisation, organometallic and coordination chemistry. A chapter dedicated to molecular electrocatalysis addresses the molecular description of reactions at the liquid-solid interphase, while studies range from a quantum-chemical treatment of individual molecular states to dynamic Monte-Carlo simulations, including the full flexibility of the many-particle systems. Complexity in catalysis is explained in chapters on self-organization and self-assembly of catalysts, and other sections are devoted to evolutionary, combinatorial techniques as well as artificial chemistry.

LEGAL NOTICE: The following PDFs files has been found on the Web. They are NOT HOSTED on our Servers. They are hosted on chg.kncv.nl, inael.com.
Contact their sites if you have any question about their content.